Born in 1924, Eileen Croxford was one of the leading cellists of her generation. During her studies at the Royal College of Music she won the coveted Queen’s Prize and the Boise Award which enabled her to study with Paul Casals. Her fine reputation was quickly established with concerto performances in the Proms and with many leading orchestras. While at the RCM she met and married the brilliant young pianist David Parkhouse, the youngest student ever at the RCM, where both she and he subsequently became Professors, thus commencing a dedication to the nurturing and encouragement of young musicians. With him and the late Hugh Bean CBE she founded the Music Group of London. The MGL performed extensively both in the UK and over a period of four decades made an enormous contribution to international cultural relations through their tours of East and West Europe, the Middle and Far East, and North and South America.

When David Parkhouse died in 1989, Eileen, with the support of their legion of friends from all walks of musical and professional life, set up the Parkhouse Award in his memory to encourage the best in piano chamber music. The Award, to the winners of a biennial international competition, is a prize for outstanding young chamber music ensembles. It enables them to launch their careers in the most practical way possible with a series of concerts in London at prestigious halls, including Wigmore Hall where the Music Group of London had celebrated their 35th anniversary. Eileen’s personal reputation and determination enabled her to assemble an influential board of Trustees and to secure the sustained financial support required to assure the future of the Award. Since 1991 the Award has achieved the status of the leading chamber music competition for young piano-based ensembles, while successive winners have attributed their international success to the experience and prestige of winning the Parkhouse Award.

In Devon, where Eileen and David spent his later years, she also celebrated his life and achievements by establishing the Shaldon Festival, now in its thirtieth year, bringing internationally renowned musicians together for recitals and workshops to the benefit of the community. 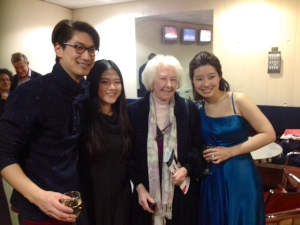